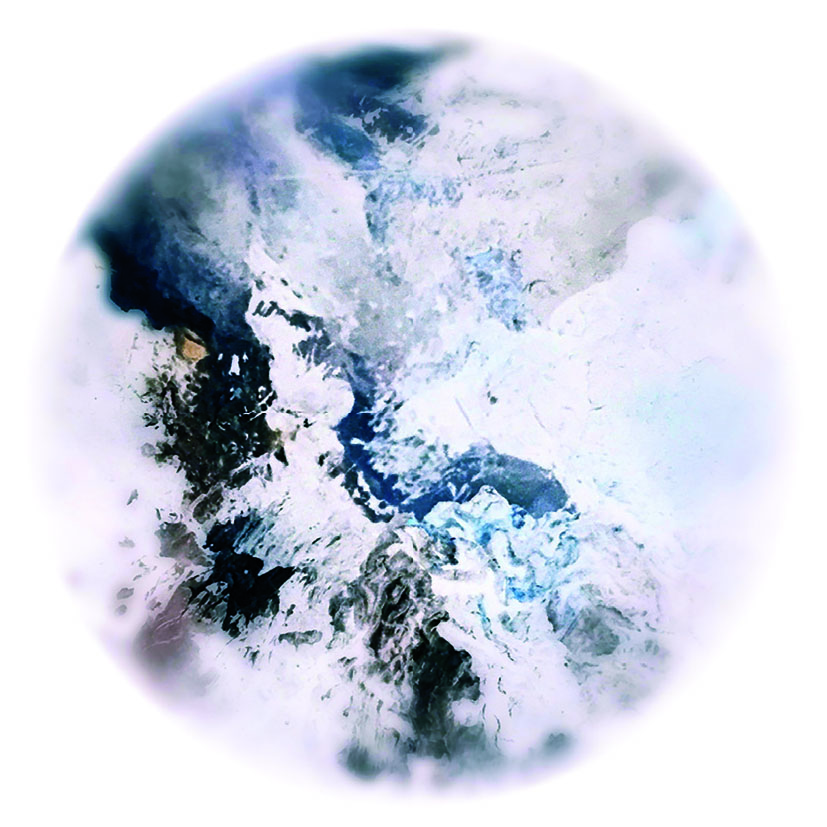 2014
EARTH SEEN FROM THE STUDIO
Postcard to the future cinema, freely based on the artist’s palette

Inspired by Sergej Eisenstein’s fragments on the “spherical book“, which is one of the most important experimental examples of the 20th century’s hypertextual worlds of thinking, ordering, and writing, and by the composer Bernd Alois Zimmermann’s concept of the “spherical form of time“, the aim is to make “curated“ knowledge accessible online, using the current polymedial possibilities.

In the spirit of the “green way“, Open Access is accompanied by traditional print publication, combining the classic book with the advantages of free online publication. Open Science stands for unrestricted Internet access to artistic research and scientific information, to make it possible to enrich and expand texts with diverse media such as images, animation, film, video, sound, and music.
KUGELGESTALT DER ZEIT

As early as the mid-1980s, Friedrich Kittler used the term “record system“ to describe “the network of techniques and institutions […] that allow a given culture to address, store and process relevant data.“ The storage of writing, images, and sound, possible for the first time, ushers in the end of the Gutenberg galaxy. The successor stage is the “total media network on a digital basis“, and the computer becomes the all-integrating leading medium. All media of the modern era implode in the computer. Universal media convergence occurs. But film history continues not only on the Internet, as Alexander Kluge writes in “Geschichten vom Kino“: “I think cinema is immortal and older than film art. It is based on the fact that we communicate something that moves us inwardly to each other in public. In that way, film and music are relatives. Both do not go under. Even if the cinema projectors stop rattling, there will still be something that works like cinema.“
WAS IST DADA ETC

In the “spherical book in progress“, hybrid space fruitfully coexists and is comparable to an experimental textbook. As an expanded “cosmic“ network project, data is published both digitally and analogously in a multidimensional way as artistic-research knowledge transfer. In the 14th Transdisciplinary Colloquium of the Film University Babelsberg KONRAD WOLF, Peter Weibel characterizes this as “A noetic turn: from a language-based to a tool-based culture.“
EINE NOETISCHE WENDE

Based on the symposium of the artistic-research masterclass GLOBE PLAYHOUSE SPACELAB, the English-language desktop publishing project will be developed as a spherical interdisciplinary “net within a net“, with linked scientific and artistic-text-based contributions by international authors.
MASTERCLASS ARTISTIC RESEARCH