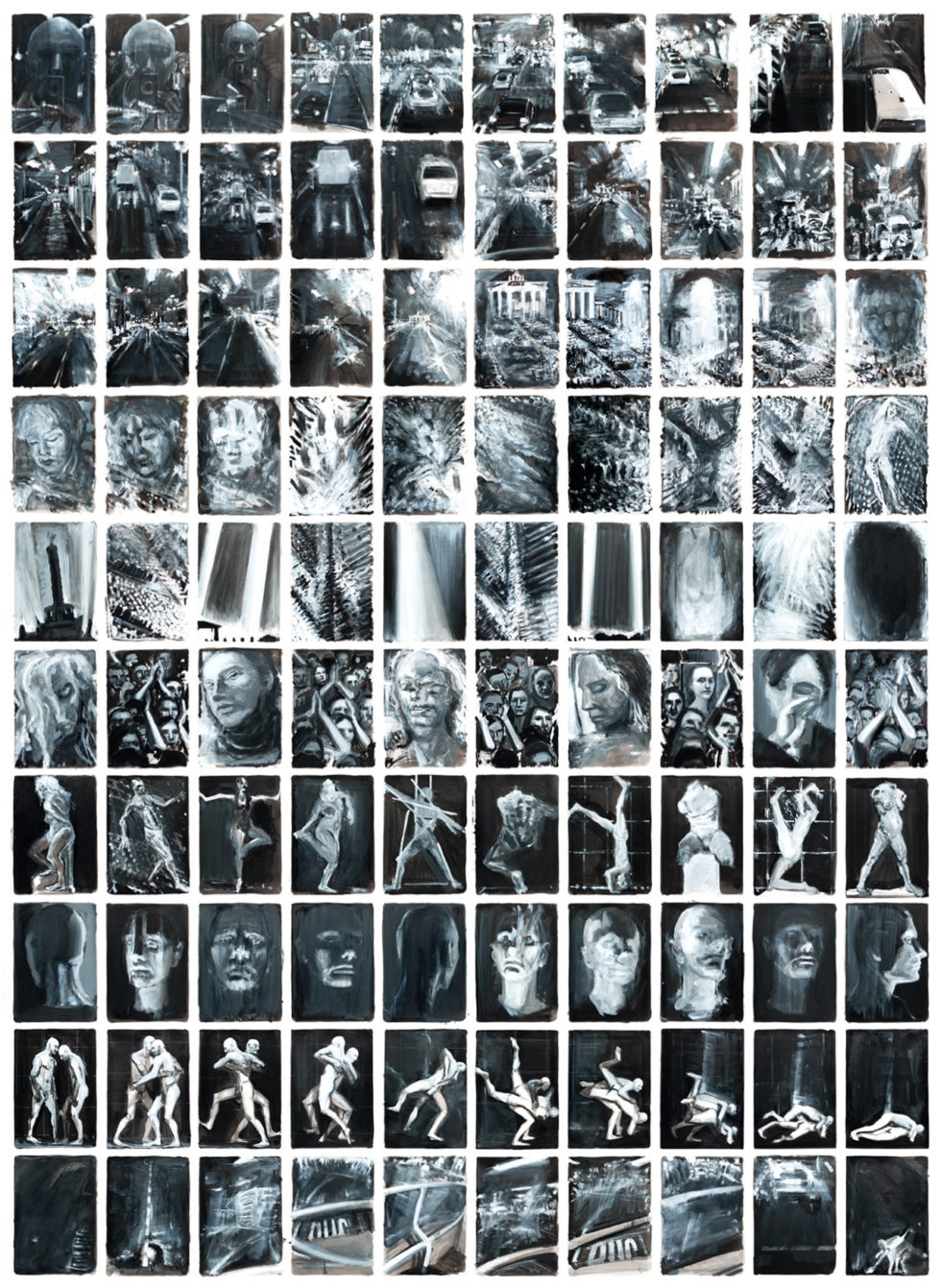 “Berlin is the Last. The rest is prehistory. If history takes place, Berlin will be the Beginning.“
Heiner Müller, interview in dry (1983)

In Berlin open studio, (2012–13) everyday urban experiences are linked with memories, impressionistic images, and the Abstract Expressionist and Surrealist tradition, as well as with graphics, painting, sculpture, photography, film, and cinema, to form a summarizing pictorial ensemble: “The future of the graphic novels lies in the choice of worthwhile themes and the innovation of exposition”, Comics & Sequential Art, Will Eisner (1985).

The album deals with basic topics: How do we compose, narrate, and remember in images? What is the relationship between music, drawing, picture and moving image or human and tool? How are recurring visual patterns traced from pre–literary and early history to contemporary analog and digital culture? What is the associated change in the spatial image? The results of the work stands in the intellectual-historical tradition of Aby Warburg’s Bilderatlas Mnemosyne, a series of images investigating the function of predefined antique expressive values in the depiction of eventful life in the art of the European Renaissance (1924–29). Artistic references are visual arts based on drawing image construction and chiaroscuro, such as Käthe Kollwitz early graphic cycle A Weavers’ Revolt (1893–1897) as well as the tradition of wordless novel [Bildroman], like Franz Masereel’s The City (1925), Alberto Giacometti’s Paris sans fin (1957–65), and other stories in pictures like the American print scene from Edward Hopper to Jackson Pollock, but also of outsiders, such as the painting poet Henri Michaux and the painter Francis Bacon, who was inspired by Sergei Eisenstein’s filmic theory and practice.

The horizontally and vertically mounted wide–screen cinema of film stills, chronophotographs, keyframes, and inkbetweens, laid one after the other in book form, creates a self–reflective movement and time track as a plastic metamorphosis that moves us inward. The intermedia work shows possible interfaces from the classical pictorial problem to time–based synthetically generated pictorial worlds, whose building material is also rhythm, montage, and the image on an elementary geometric basis. This thinking in temporal and spatial succession also makes it possible to compose nonlinear associative breaks and variations in the flow of images, which interrupt the continuity of the sequence of actions and demonstrate how planning, cultivated coincidence, and intuition work together.

The digitally reproduced image or photo novel Berlin open studio (2012–13) depicts in poetic realism the author’s imaginary nightly ride on the No. 100 bus from Alexanderplatz to Zoologischer Garten. Beyond tourism, Berlin is experienced phenomenologically with an openness to the totality of phenomena associatively via the gesture, as an experimental historical flipbook about the central interface on Pariser Platz between East and West. The material was first researched photographically on site and in archives and later further developed and refined in the studio as mixed media on machine laid paper: The Photography lets the imaginary meet the real through pictorial post–processing.

Berlin open studio (2012–13) is the intermedia theorem of a new expanded école artistique that transcends the boundaries of fiction and reality in terms of form. The image history is a network of elective affinities and is intended to recall the secret agent’s wanderings in Jean-Luc Godard’s Allemagne Année 90 Neuf Zéro (1991) and Walter Ruttmann’s Berlin: Symphony of a Metropolis (1927) as well as Dsiga Vertow’s Man with a Movie Camera (1929) and Alexandre Astruc’s subversive and obsessive auteur concept, in Naissance d’une nouvelle avant–garde: la caméra–stylo (1948), which is synonymous with créateur, instigateur or inventeur, and Roberto Rossellini’s Neorealism feature film trilogy Roma città aperta (1945), Paisà (1946), and Germania anno zero (1947), which was shot in bombed–out Berlin.

The hybrid project is a sensual new edition and missing connecting link between the movement of Nouvelle Vague and Conceptual Art respectively, a sequential bridge and prequel to the cinematographic installation Alias Yederbeck: Expanded Animation Cinema (2011) by Frank Geßner/Paul Yederbeck and thus a dual Vision du Monde of a self-designed auto-(author-)construct towards a “Museum without Walls“, André Malraux (1967). FG