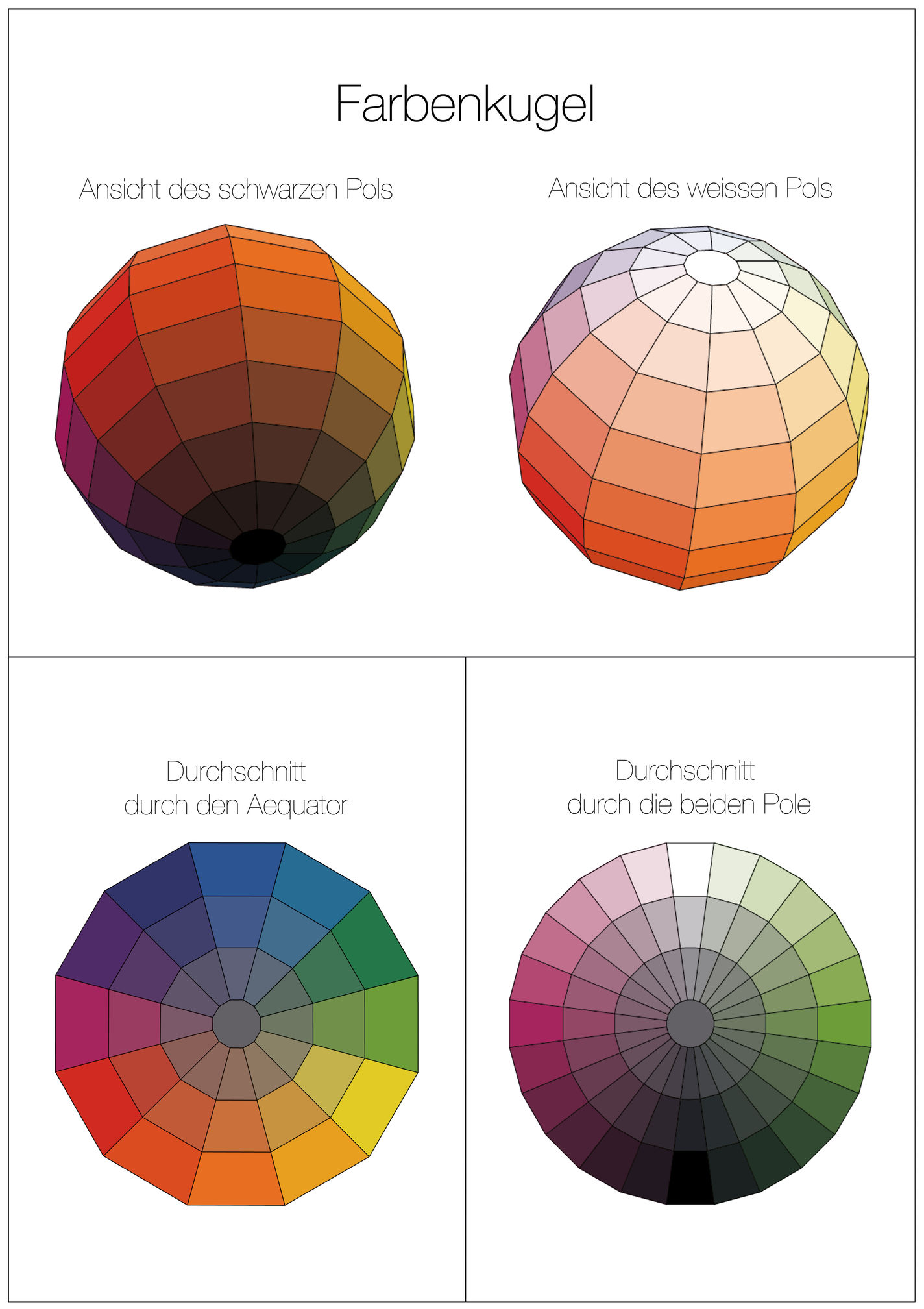 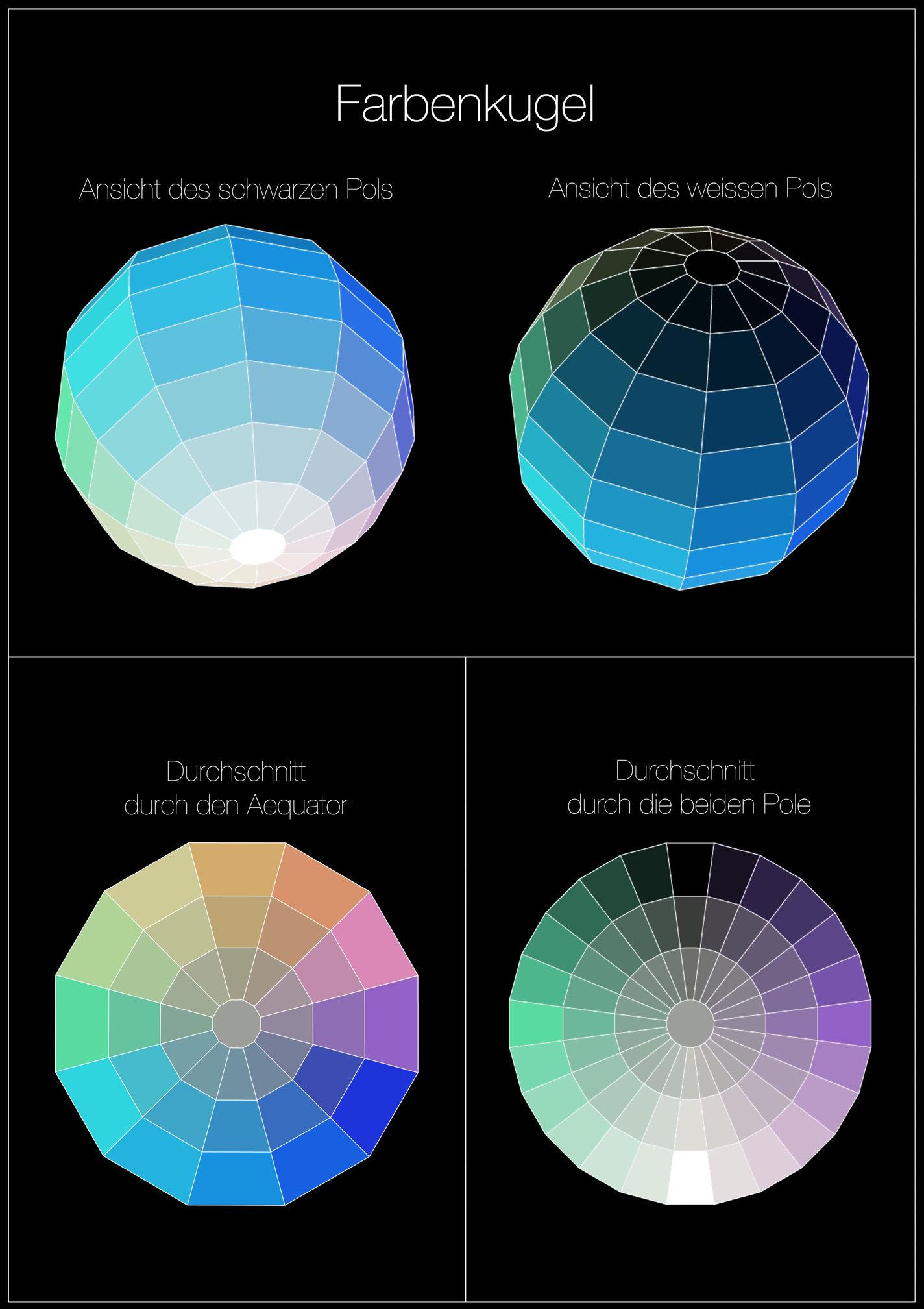 “(…) This corresponds especially well with twelve-tone music and the standard clock. In the exhibition PANORAMAVISION, this system appears most clearly in the two 2-channel video steles ALIAS YEDERBECK REDUX: NIGHT & DAY (SATELLITE I+II), which Frank Geßner describes as follows: “The installation is a continuation of the so-called ‘Runge Sphere’, a color system developed in 1810 by the painter Philipp Otto Runge that depicts the mixing ratios of the primary colors red, yellow, and blue, as well as the respective shades toward the black and white poles. The new interpretation of the sphere refers not only to the dial of the clock. The 12-part sphere is also normed, optimized, inverted, and animated, i.e., set in rotary motion, and furnished with Cole Porter’s song ‘Night and Day’ (1932) from the musical ‘Gay Divorce’. The classic song’s interpretation by Ginger Rogers and Fred Astaire thereby underlies the inverted ‘night’, while a version by Django Reinhardt accompanies the ‘day’. Both variants are also combined with the sound of a collision between two black holes that occurred in 2016 (cf. ‘Hubble Dates Black Hole’s Last Big Meal’, Nasa News Online). Like artificial companions or sentinels, the NIGHT & DAY satellites orbit the two-door and twelve-cornered ‘planet’ AYR PALLADIO MODEL (PROTOTYPE DD). In the latter, the 12-channel installation ALIAS YEDERBECK is shown; it, in turn, consists of twelve different panorama sequences and refers to twelve auto-/author constructions.” 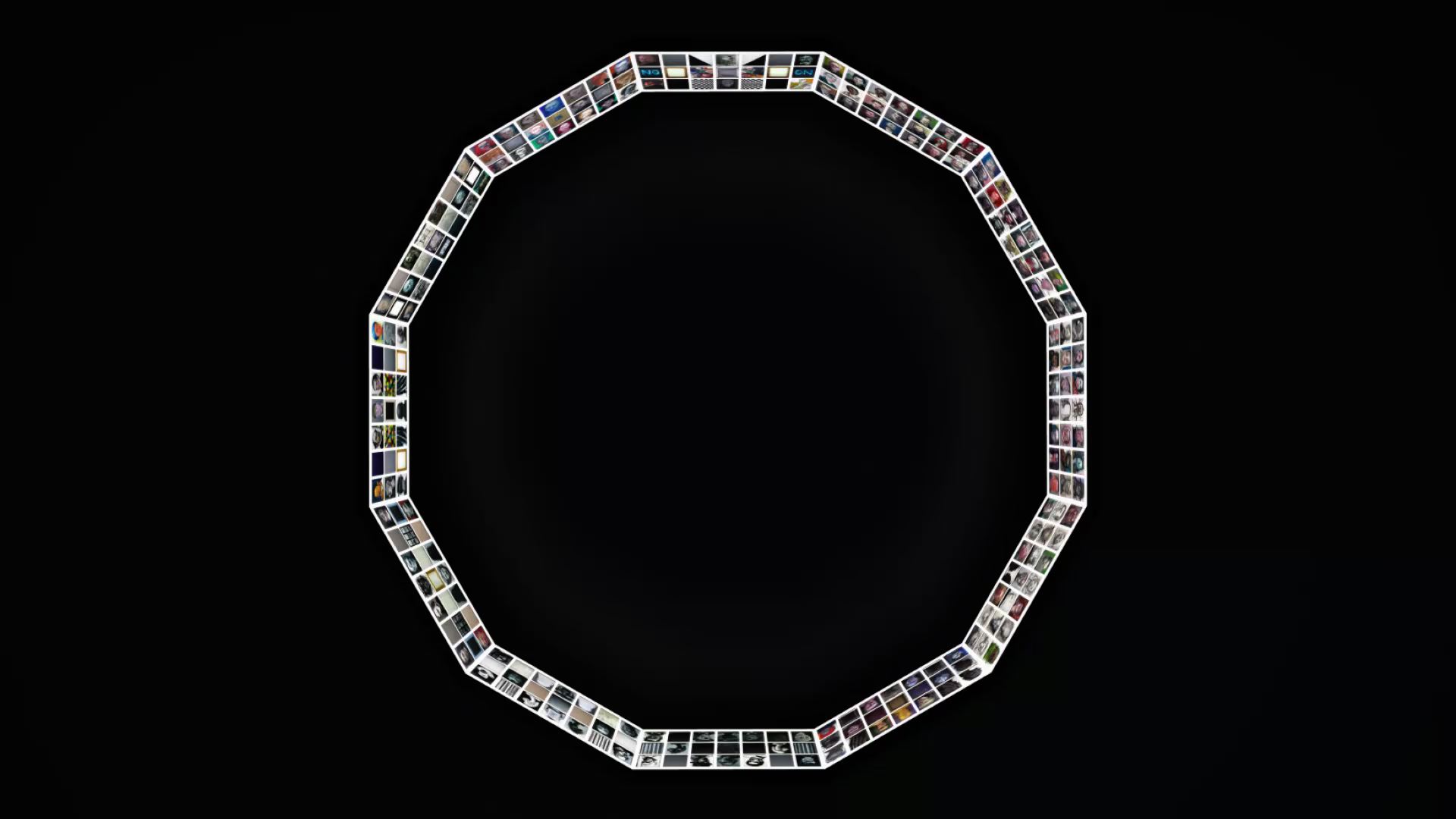 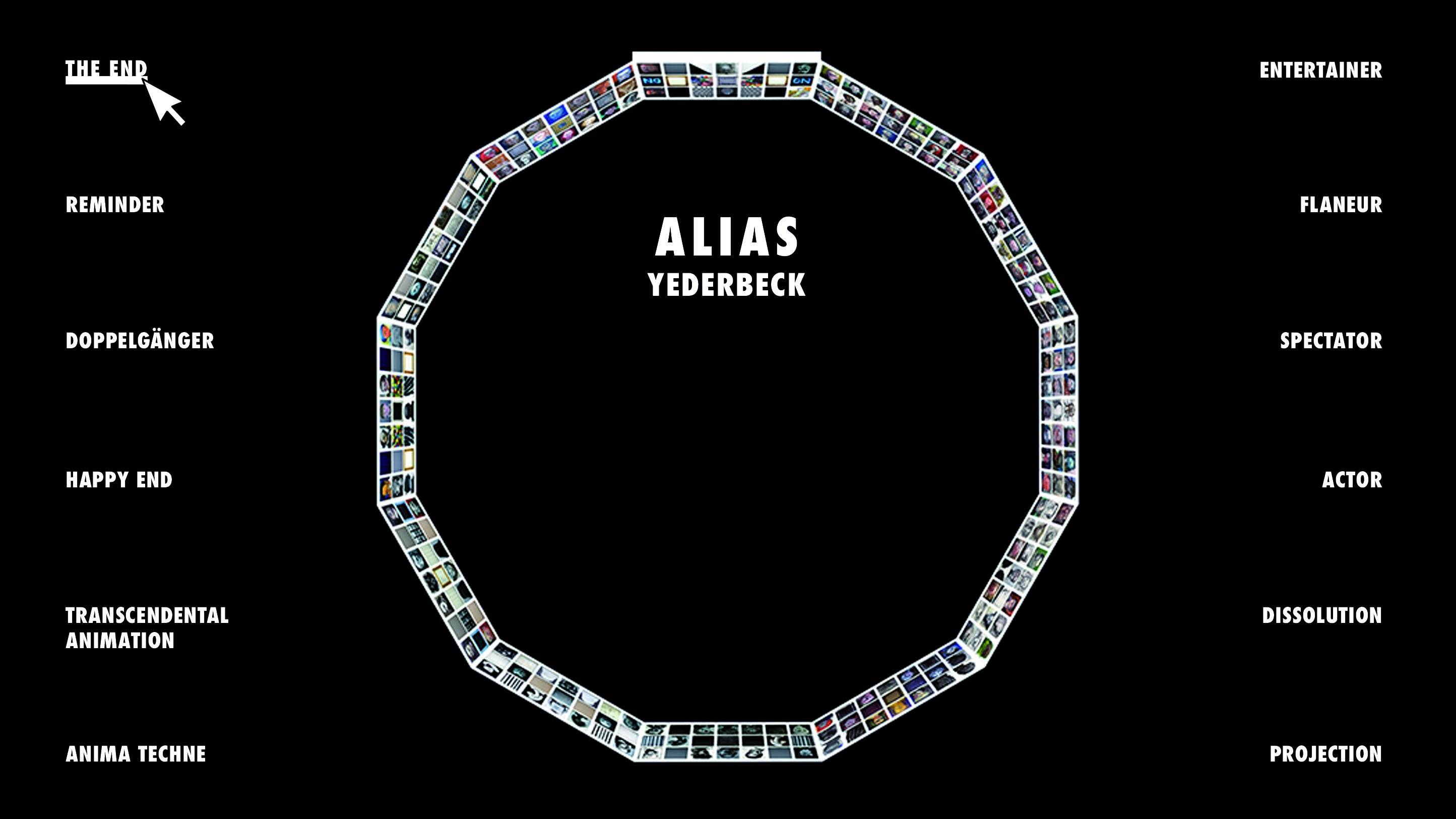 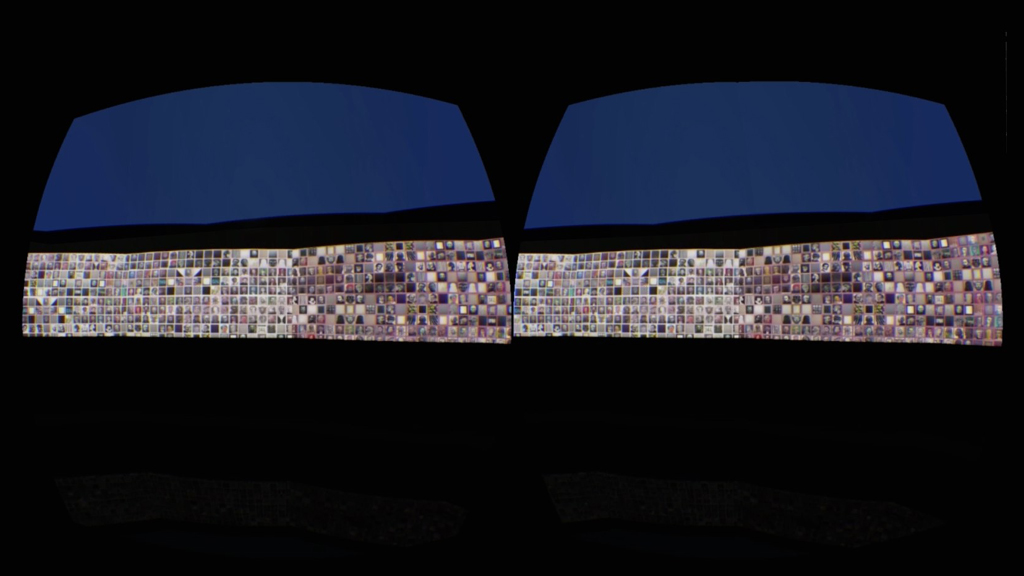 Virtual reality is an experience taking place within simulated and immersive environments that can be similar to or completely different from the real world. Currently standard virtual reality systems use either virtual reality headsets or multi-projected environments to generate realistic images, sounds and other sensations that simulate a user’s physical presence in a virtual environment. The Oculus Rift is a virtual reality headset. Already at the beginning of 2013 a developer version, so-called ‘Developer Kits’, was delivered. Main component of the Oculus Rift is a display with a resolution of 1280 x 800 pixels, which corresponds to an aspect ratio of 16:10. Since the display is split and provides the images for both eyes separately, this results in an effective resolution of 640 x 800 pixels per eye and an aspect ratio of 4:5. In the end customer version, a higher quality display with Full HD resolution was used with a resolution of 1920 x 1080 pixels (or 960 x 1080 per eye). Such HD glasses are used for the ALIAS YEDERBECK REDUX prototype II in 2016. The project ALIAS YEDERBECK REDUX: VIRTUAL INSTALLATION! makes the work of art available independent of location and offers the user a synaesthetic documentation of the original cinematographic installation ALIAS YEDERBECK. The 3D reconstruction and the telepresence technology enable a realistic experience of the otherwise inaccessible media artwork. FG 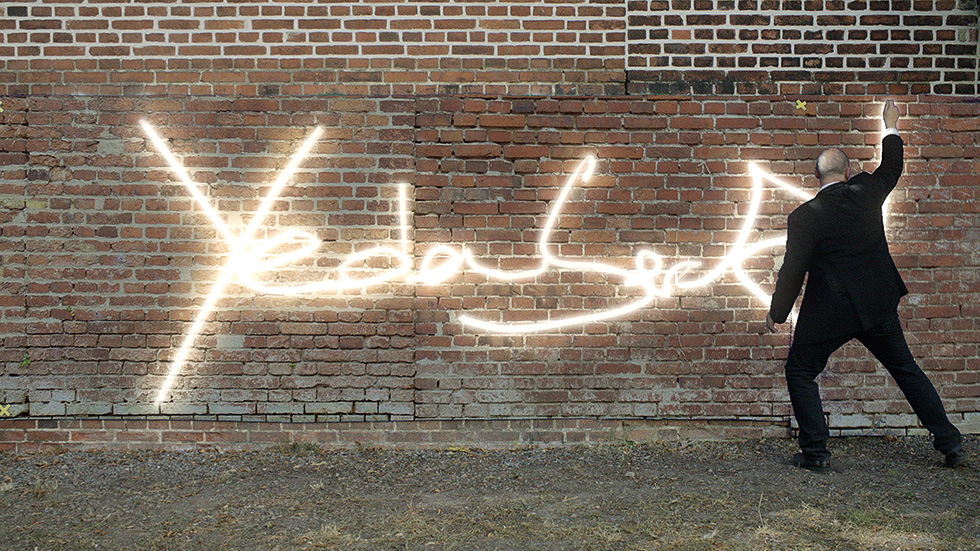 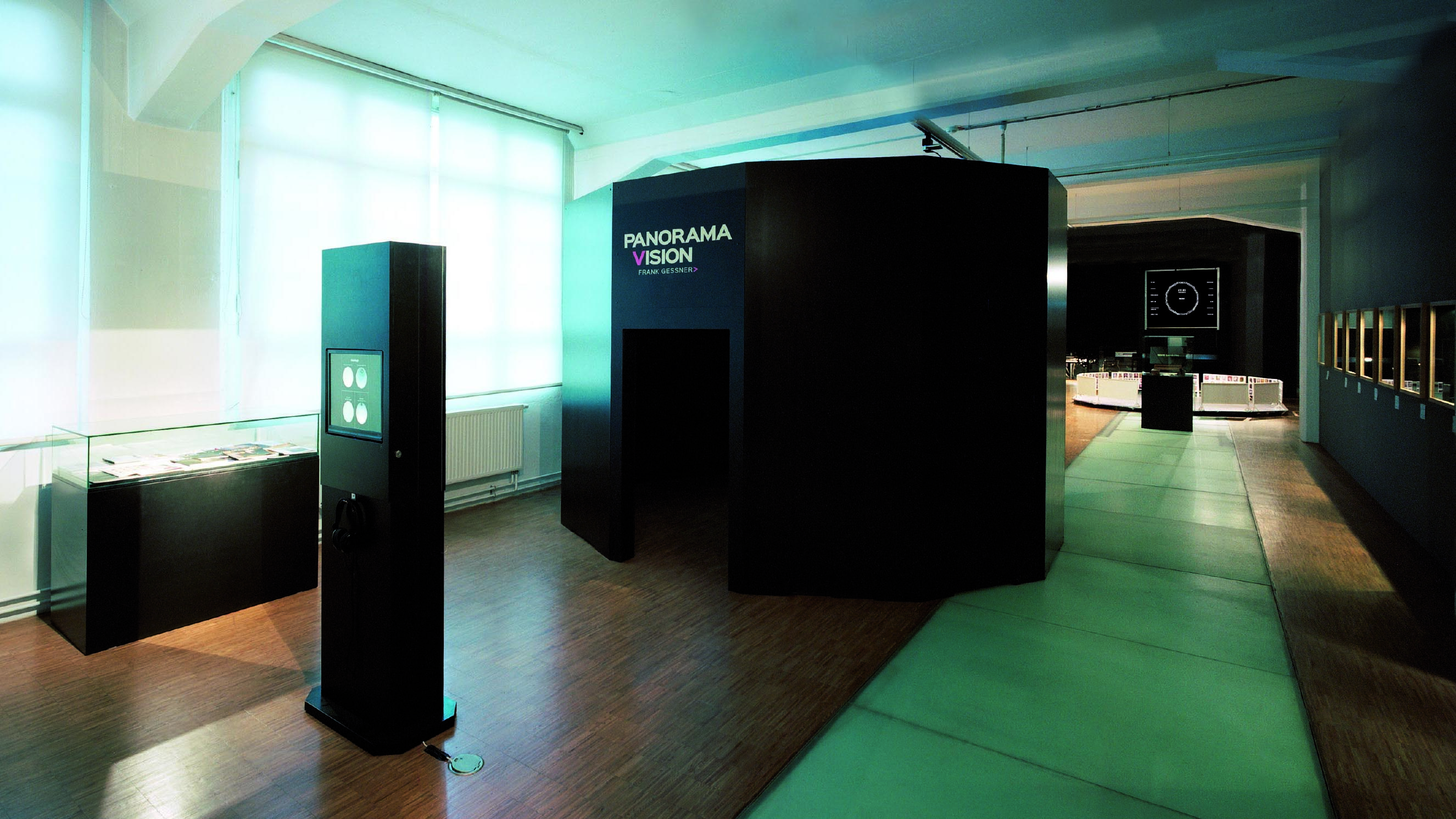 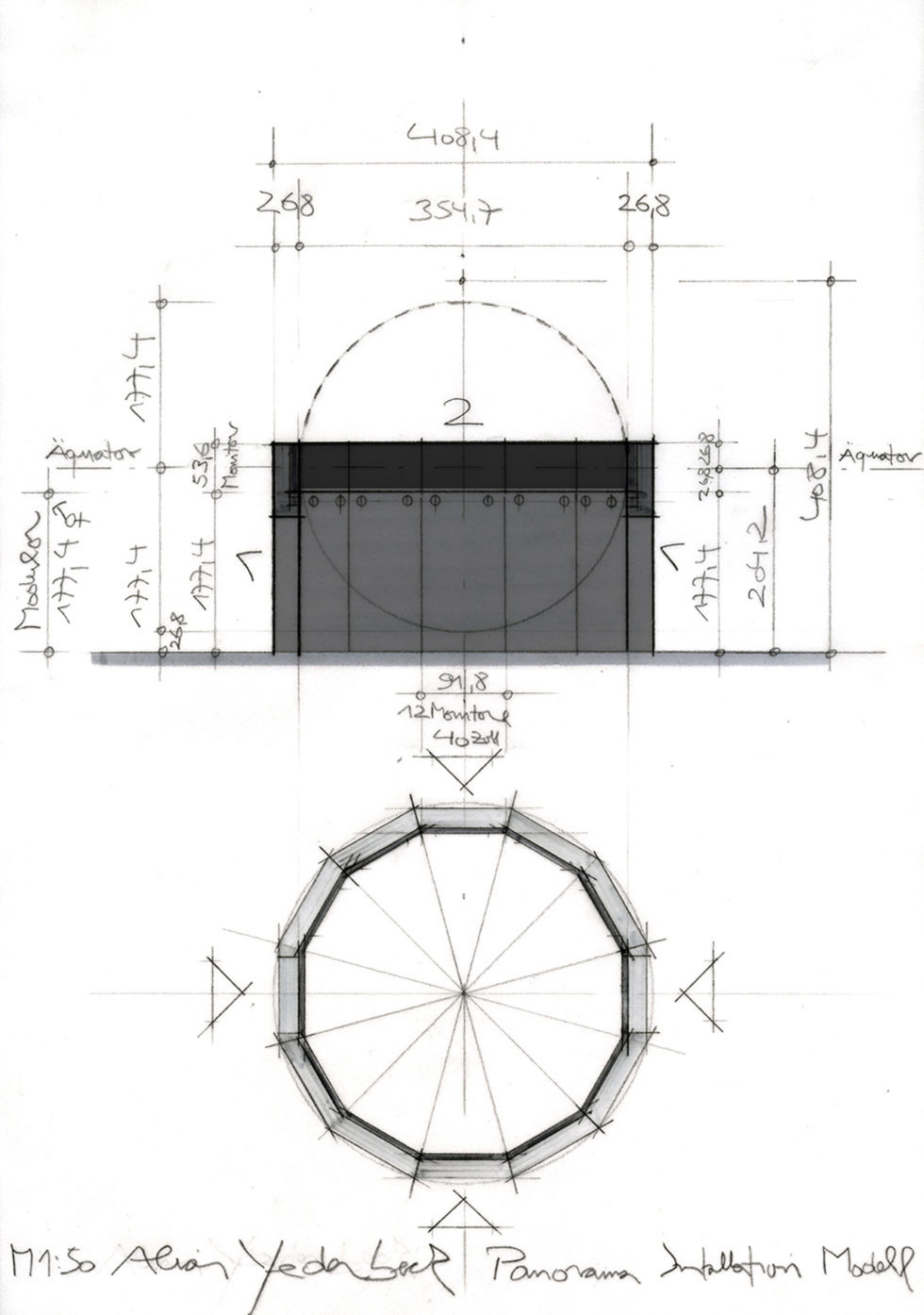 “In no way is artistic research a self-referential, self-enclosed, art-for-art’s-sake principle. As Frank Geßner’s exhibition PANORAMAVISION shows, artistic research is an art-immanent aspect of artistic thinking and artistic practice. It does not illustrate or describe any existing picture or likeness; rather, it grasps the world we live in in its heterogeneity and takes that as the starting point for developing ideas, for example of a VISION of what our ‘today’ can be tomorrow. I speak quite consciously of ‘us’, because it is no coincidence that, in conceiving his PALLADIO MODEL (PROTOTYP DD) of the cinematographic 12-channel installation that we see as the central motif in the exhibition, Frank Geßner refers to Le Corbusier’s ‘Modulor’. The ‘Modulor’ is the very emblem of a modern view (which has been around since the Renaissance) that all construction that all construction, all architecture should relate to the human scale, human proportions, and human perspectives. No ‘far out’, crazy theory, therefore: this approach claims that I, you, and we are responsible designers of every new step, of every architecture that will surround us tomorrow. The many personal as well as historical references in the exhibition describe or symbolize the complex system of references that constitutes our identity. For we are not only now, we are also a part of yesterday, we are today and tomorrow – and: it is US who are shaping that very process!”

“From the animated movement in space, the exhibition continues to a reflection of space in which images appear digitally. PALLADIO MODEL (PROTOTYP DD) is a twelve-sided space built for the exhibition without the projected dome. The model breaks up the rigid statics associated with Le Corbusier’s ‘Modulor’ by recalling Palladio’s architecture. In the PALLADIO MODEL, the images are no longer projected onto the walls, but onto screens. The 252 pictures have the title TESTE SANS FIN, in memory of Paul Valéry’s text: ‘There is no certain picture of Monsieur Teste. All his portraits differ from each other.’”